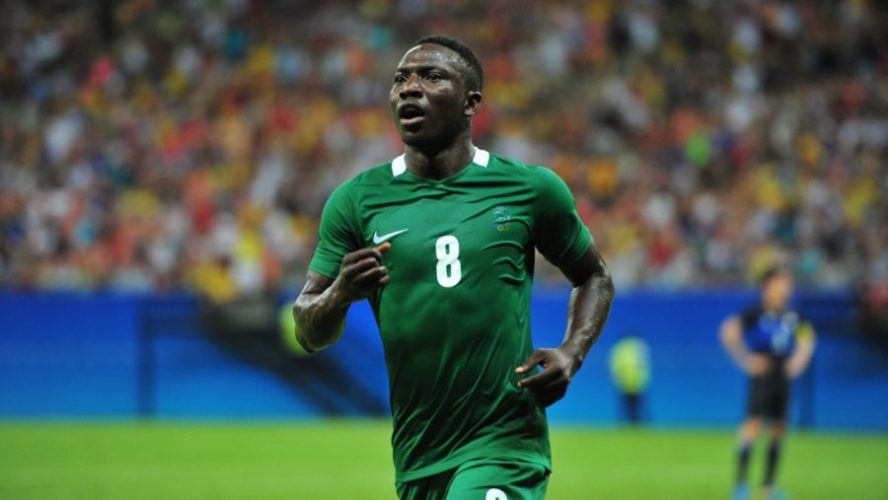 Moving from small to bigger teams is just what a player envisions their hard work to result to. And when it comes to scoring big deals as such, Oghenekaro Etebo is one to tell the tale. Just as he was fulfilling his second great season with C.D Feirense in Portugal, UD LA’s Palmas signed him on loan this year, with a buyout clause of course. This was the result after Etebo’s outstanding performance for C.D Feirense; marking the rise of his football career at 20 years old.

Etebo on growing up

Born and bred in Delta State, in the city of Warri, Etebo recalls no setbacks brought by his upbringing, noting that support was nothing he fell short of either.

“I got the right support from my family. They didn’t stop me at any day not to play football even when I was in my school days”, Etebo says proudly.

According to the young soccer star, things began falling in the right path when he laudably signed his professional contract with his state team, Warri Wolves. This after a great sojourn with grassroots teams which he played for in both the Obas Cup and the State Cup.

Etebo on his football career

Renowned for his skillful on-field energy and attacking qualities, this midfielder continues to live up to his commendable name. Etebo boosts with awards such as the Golden Boot in Africa Cup of Nations (U23), the Glo Wondergoal award for the best goal of the 2014-2015 NPFL season and quite impressively he won the Most Promising Talent of the Year award at the CAF Awards.

It is not only due to his love and passion for the game that he holds as many accolades. Etebo gives credit for his growing achievements to the grace of God. Regardless of what he can claim under his belt, he picks not one moment in particular to be the most memorable, but all.

“All the moments through my football career have been special. I’m still hoping to get the best and even though I’m happy now, with my moments, I’m still counting on the bigger ones ahead”

And lastly, Etebo share some words of advice and thoughts about the World Cup.

Having seen the capabilities of this talented player it is merely doubtless to expect even more and looking at his streak, it’s only inevitable to be looked upon. The advice Etebo gives to aspiring players looking to climb the ladder just as high is self-motivation as the drive of all abilities.

When it comes to the upcoming World Cup Championship, which happens to be the tip of the tongue in every soccer lover, the pressure for Nigeria to win is beyond say. But what are the chances you ask? Although that cannot be assured, according to Etebo there is no doubt that the Super Eagles will make Nigeria proud in Russia.