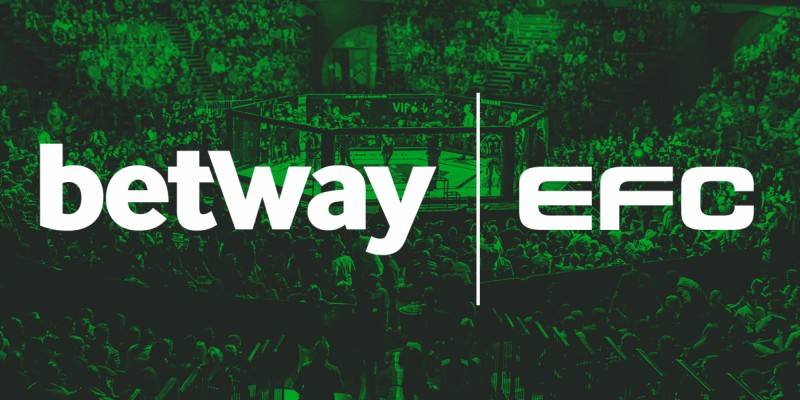 Worldwide sports betting brand Betway has announced its partnership with Extreme Fighting Championship (EFC). Under the new agreement the bookmaker will be the official betting partner to the Mixed Martial Arts (MMA) broadcaster.

The deal was announced in late September, just before EFC 82, which took place at Carnival City, Johannesburg. The South African city is where the EFC head office is based, and EFC 82 is one of 10 annual live events that are coordinated from these headquarters.

The sold-out fights showcase top MMA competitors, with more than 200 world-class athletes exclusively signed to Extreme Fighting Championship. Matches are not broadcast to Africa only; they air on numerous networks in 120 countries around the world and reach over 600 million viewers.

Excited to Partner with Betway

Cairo Howarth, President of EFC, said his organisation is excited about the new deal. He described the bookmaker as African’s leading betting brand, and added that the partnership would allow EFC to bring world-class betting experiences to sports fans across the continent. Both businesses are expanding through Africa, with EFC one of the world’s most recognisable MMA organisations and Betway operating across regulated markets in South Africa, Zambia, Mozambique, Ghana, Uganda and Kenya.

The Gaming Commission of Ghana, as well as several other globally recognised regulators license Betway so bettors can be sure that their funds will be protected and that their winnings will always be paid out fairly. Howarth concluded that the MMA broadcaster is proud to be working with a brand that is “globally recognised and trusted” as both companies increase their customer base.

For its part, Betway has also expressed its satisfaction with the agreement. The sportsbook will now be promoted to 200 million EFC fans across Africa, during broadcasts on the continent’s largest television channels in prime time. This should substantially increase the amount of wagers placed on the site that was launched in 2006.

Betway’s Country Marketing Manager, Kwabena Oppong Nkrumah, said his employer is “thrilled” to have finalised the recent partnership with EFC. As MMA grows in popularity, he explained, the betting site was eager to expand and ensure it was offering wagers to the burgeoning fan base.

With the high degree of professionalism that EFC has demonstrated, Nkrumah continued, the broadcaster was the “natural choice” as partner to the bookmaker that is already linked to teams and tournaments around the world including West Ham United.

Besides offering convenient online betting, Betway will now also allow EFC fans to place wagers at live MMA events. Spectators will need to complete the simple process of opening an online sportsbook account, and will then be able to bet on the results of matches that they are watching in real life.

The live betting options are expected to increase bettor engagement, EFC popularity and Betway site traffic as both the MMA broadcaster and international bookmaker continue to prosper and grow. All parties will benefit, including Betway customers who will be able to take advantage of a monthly free bet.