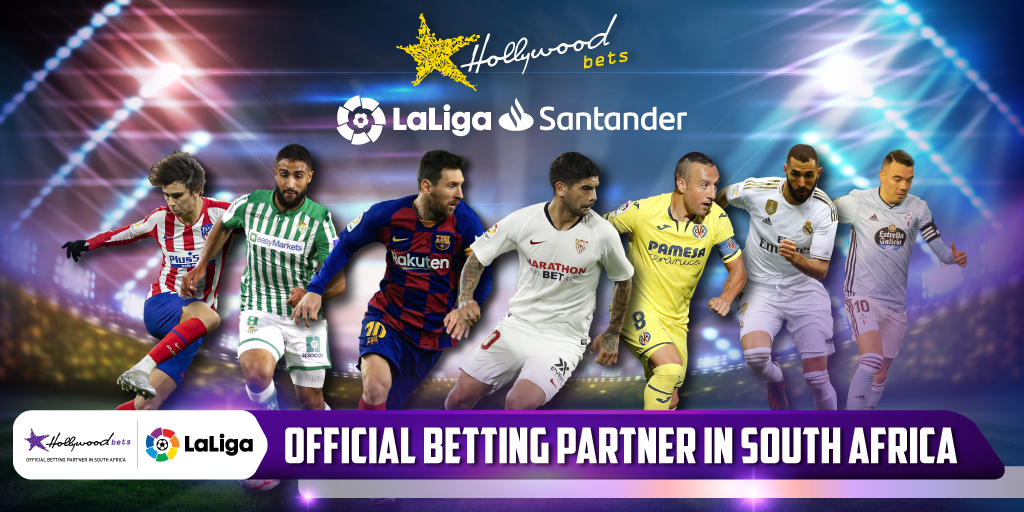 LaLiga, the professional Spanish football league, announced today its first partnership deal in South Africa with local sports betting company, Hollywoodbets. After signing a deal until the end of the 2019/20 season at an exclusive press conference this morning, the Durban-based organisation has become the official LaLiga Betting Partner in South Africa.

A first-of-its-kind partnership in South Africa, LaLiga believes that, as one of the country’s most prominent betting companies, Hollywoodbets is the perfect partner. The unique South African brand is aiming to not only impact the LaLiga fans with this partnership, but also to create innovative projects which will bring LaLiga closer to its followers.

South Africa is a strategic market for LaLiga – the football organisation has had a presence in Mzansi since 2015 through its internationalisation programme. By partnering with a leading local brand that has a proven track record of supporting development teams within their communities and having supported 140 teams within just the last year, this partnership further reinforces LaLiga’s investment in the country and mission to develop football at a local level. Through partnering with a team that is over 5 300 members strong it will become possible to reach more up-and-coming players and teams on the ground.

The partnership will include the appearance of Hollywoodbets on Digital Board Replacements (DBR) and 3D Carpet during the LaLiga Santander Matches. There is also a trade exchange of tickets and merchandise that Hollywoodbets will use for upcoming campaigns.

Bhengu said: “We are proud to be a partner of one of the best football leagues in the world. South Africans are devoted to football and LaLiga is widely enjoyed throughout the country. We are confident that this will be a long-term and effective partnership with LaLiga. As a company that believes in investing in our communities, we look forward to touching more lives in collaboration with a brand like LaLiga that shares in this vision. We are confident that this is the beginning of a new era in South African football entertainment where our future SA stars will be touched anew by their international football heroes.”

Pelegrín added: “Strategic partnerships like these help us to penetrate and expand across new markets. We want to keep growing in the South African market, as we endeavour to increase our fan base and bring LaLiga even closer to our fans.”

“Further, this partnership allows us to keep working on developing football in Mzansi, as we have been doing in various community tournaments in places like Soweto, Port Elizabeth and Polokwane. This has been a shared driver for both brands to partner on, and it is also an important objective for Hollywoodbets,” concluded Pelegrín.